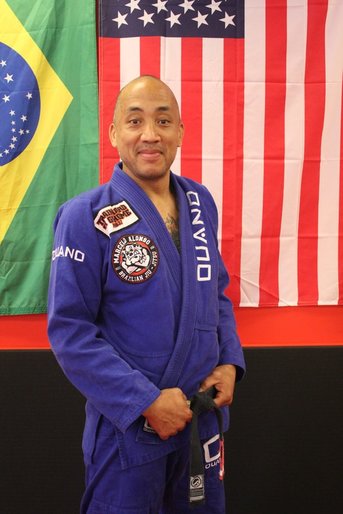 I grew up in Portsmouth, NH and started training martial arts (Tae Kwon Do with Master Park!) at the age of 9. When I was 16 I received my black belt, followed my second degree black belt at 18. I loved martial arts (and fighting). As an adult I also trained boxing and kickboxing before finding my true passion in Brazilian Jiu-Jitsu.

When I found BJJ I was 28 years old and living in Seattle, WA. I was the head of security for The Crocodile- arguably the best bar/live music venue in the city. Physical altercations with intoxicated and/or angry patrons were a daily occurrence and considered par for the course. I also worked for the Washington State Department of Corrections, where I had to constantly be aware of my safety as well. At The Croc, people would attempt to or successfully assault me and my staff daily. Their sucker punches, kicks, spitting, and scratching were returned with punches and let me tell you, after years of this my hands hurts!

One night, a friend that was training BJJ wanted to show me that it did not matter how well I could punch and kick, or that I was 240 lbs, when he put me on the ground. He did, and I was unable to get him off of me or get up. It was like drowning. Right then, I knew I had to learn BJJ.

I started going to MABJJ (Marcelo Alonso BJJ, Team Carlson Gracie) and I was hooked... Even though for the first three months it was incredibly hard. I was a big guy and I had no idea what I was doing; I would leave feeling completely unsure of myself and yet I would return again the next day. I absolutely loved it.

The 240 lbs I started at- I didn’t stay that way for long. The weight fell off of me and the more it did, the easier it was to move and train. I competed as often as I could and I stayed with Marcelo for several years, earning my purple belt. In 2009 my mom’s health wasn’t the best so I decided to move back home to Portsmouth.

When I got here, I was a purple belt and continuing to train was a priority. I visited some local schools and had fun training but none of them were quite what I was used to or looking for. After a lot of talks with Marcelo, KWBJJ was born.
Fast forward 8 years and KWBJJ is still thriving! I received my black belt from Marcelo in 2012, and my first degree in 2016. I visit Seattle to continue my training with Marcelo, and he comes out at least twice a year for seminars.

Jiu jitsu has changed just about every aspect of my life for the better. It's taught me patience, perseverance, and dedication; it's taught me how to have better self-care through the way I fuel, treat, and listen to my body. The most important thing that jiu jitsu has done in my life, though, is the way my mind processes thoughts, anxieties, and the world. I truly am a better person- the best version of myself- because of BJJ. It sounds a little cliche but it's the truth! I love teaching and being along for the ride on everyone's journey through jiu-jitsu.

I feel very blessed and grateful to be able to do what I am passionate about, every day of my life.